Dorothy Hoddinott AO is former principal of Holroyd High School in Western Sydney and is Presiding Pro-Chancellor of the University of Sydney. She was president of ATESOL NSW and was instrumental in establishing ACTA.

Dorothy was made an Officer of the Order of Australia in 2008 and was awarded the Australian Human Rights Medal in 2014 for her work protecting the human rights of refugee and disadvantaged students. She is Ambassador for RACS, the Refugee Advice and Casework Service and a director of Career Seekers.

Dr Jacqueline D’warte is a Senior Lecturer in English language and literacy curriculum and pedagogy in the School of Education at Western Sydney University and a Senior Researcher in the Centre for Educational Research.

Jacqueline has been a teacher in Australia, India and the United Kingdom and a teacher educator and lecturer in New York City and at the University of California Irvine and Los Angeles. Jacqueline’s research interests include language and literacy teaching and learning and the connections between language, identity, equity and learning in culturally and linguistically diverse educational settings.

Jacqueline’s most recent research projects include a study of multilingual pre-service teachers and an ongoing project that engages teachers and students as co-researchers of students; language and literacy practices.

You can find the recorded session here – Recorded Session 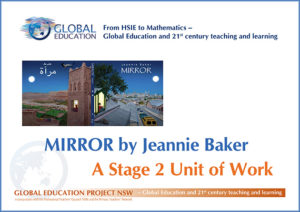 This unique text compares in pictures the lives of two boys living on opposite sides of the world. One boy lives in a city in Australia the other in Morocco, North Africa. The book contains a short introduction written in English and Arabic and then proceeds to tell the story of a day in each boy’s life through pictures.

The book illustrates how culturally different each boy’s life is whilst at the same time highlighting the similarities. It touches on the concept of global trade and provides a look at the way in which the environment affects areas such as food supply and provision, architecture and local trade.

A series of activities devised by Julie O’Keeffe

This resource appeared in the AETA Asia Journal Issue 4, 2014. The issue was funded through the Global Education Project of NSW.

The Monsoons is a Stage 3 & 4 Geography resource, it first appeared in the AETA Asia Journal Issue 1, 2015. The issue was funded through the Global Education Project of NSW.

This text covers the core human rights and social justice issues surrounding refugees, asylum seekers and mandatory detention in a fast paced gripping story told through the eyes of a child. It brings the human dimension to the political arena and encourages children to look at the reasons behind families seeking asylum rather than dehumanising the process.

This text provides a springboard for many rich discussions on migration (an Australian Curriculum history topic in Stage 3) and is to support primary teachers in teaching Migration, Education for Sustainability, Global Education and English in an integrated and pedagogically sound manner.

A classroom resource based on the book Sacred River – The Ganges of India by Ted Lewin.

Responding to text, including picture books and novel is a classroom resource created by Julie O’Keeffe.

This resource appeared in the AETA Asia Journal Issue 1, 2015. The issue was funded through the Global Education Project of NSW.

A brief assessment task for one of the world’s most biodiverse regions by Phillip O’Brien, Minaret College.

This resource appeared in the AETA Asia Journal Issue 2, 2014. The issue was funded through the Global Education Project of NSW.

This unit of work developed by Ross Mackay is based on the Northern Territory Dept of Education resource kit “The Makassans”.

This resource appeared in the AETA Asia Journal Issue 2, 2014. The issue was funded through the Global Education Project of NSW.

A resource on the Caste System of India by Di Dunlop addressing aspects of History, Geography, Legal Studies and Society and Culture.

This resource appeared in the AETA Asia Journal Issue 4, 2014. The issue was funded through the Global Education Project of NSW.

This resource devised by Ross Mackay looks at the Hijab and explores the aspects of identity and cultural diversity. Key Learning Areas: Studies of Religion and Society and Culture

This resource appeared in the AETA Asia Journal Issue 3, 2014. The issue was funded through the Global Education Project of NSW.

The Hijab: Facts, Myths and Realities